Addis Ababa, 10 February 2019 – African Heads of State and Government, Ministers of Health and Finance, business leaders and global partners gathered yesterday ahead of the 32nd Summit of the African Union (AU), to launch a new initiative aimed at increasing commitments for health, improving the impact of spending and ensuring the achievement of universal health coverage across Africa’s 55 countries.

With the 2030 Agenda for Sustainable Development just over a decade away, H.E. President Paul Kagame, President, Republic of Rwanda and AU Chair, convened the Africa Leadership Meeting: Investing in Health to encourage African governments and global partners to translate commitments into measurable actions, align spending with country and continental priorities, and identify efficiencies that will improve millions of lives across the continent.

“Governments should surely be willing and able to increase domestic investment in healthcare. A good indicator of this is the progress we have made toward securing the financial health of the African Union and mobilising our own resources for joint priorities, such as the Peace Fund. We should be the first ones to contribute to efforts that directly benefit our people,’’ said President Kagame.

H.E. Moussa Faki Mahamat, AU Commission Chair declared, “We set ambitious health targets for 2030: ending epidemics and achieving universal health coverage for all. But the reality is that without substantial increases in domestic investment, and a radical change in the way health is harmonised to domestic and continental priorities, we will soon lose any realistic chance of reaching these objectives. Member States and Africa’s partners must reorient health spending and health systems to target the diseases across the life cycle that have the greatest measurable impact on mortality and human capital development. We have a responsibility to African citizens to increase our investments today and we must not turn our back on them.”

Since the Abuja Declarations in 2000 and 2001, Africa’s progress in improving health outcomes has been significant. Life expectancy has increased by more than a decade, deaths from infectious diseases like malaria have halved in Sub-Saharan Africa, and under 5 mortality rates have seen an increased rate of reduction.

However, enormous challenges remain. More than half of Africa’s population currently lack access to essential health services, and millions die every year from commonly preventable diseases. Meanwhile, only three AU Member States dedicate 5% of GDP to health, as set out in the Abuja declarations. Between 2016-16, 30 Member States increased the percentage of government budget invested in health, while 21 decreased their investment.

The new initiative is the first platform of its kind bringing together governments, business leaders and the global development community, to coordinate efforts and resources for health.

“I am tremendously inspired by this African-led initiative to boost investments in health across Africa,” said Peter Sands, Executive Director of the Global Fund. “To end epidemics, strengthen health systems and deliver universal health coverage, we all have to step up our investments in health.”

The meeting saw public and private sectors, as well as donor governments, pledge up to US$200 million to help end epidemics and bring universal health coverage to all. Higherlife Foundation, the Government of Ireland and Government of France all committed to increased financing of health in Africa, with the Government of Japan tabling universal health coverage as an agenda item at the G20 Osaka Summit later this year, carrying forward commitment to and collaboration on health.

Meanwhile, African leaders urged countries to increase efficiency in their health sectors. The World Health Organization estimates that efficiency improvements could unlock at least 20%, and as much as 40%, of current spending on health, creating significantly better outcomes. More effective tax and revenue collection systems were also discussed, noting that improvements in these areas could have the potential to raise an additional US$200 billion annually.

African leaders and global partners alike noted that the return on investment from increased and improved health financing is remarkable – 9-20 times the level of investment. $30 per person can generate $100bn in economic gains five years later.

H.E. Sahle-Work Zewde, President of the Federal Democratic Republic of Ethiopia noted, ‘Africa needs transformational leadership. We must bring hope and opportunity to our people and offer them full and prosperous lives. Growing our continent will be impossible if we do not put significant investments in health”

Recent months have seen concerning news which puts decades of progress at risk: measles and malaria cases rising, the rising toll of Ebola, and a rise in vaccine-derived polio outbreaks. Adding to the challenge is the fact that development assistance for health has stagnated since the 2008 financial crisis. While Africa accounts for 24% of the world’s disease burden and for 16% of the global population, it receives just 1% of global health spending.

Dr Seth Berkley, CEO of Gavi, the Vaccine Alliance commented, “Since 2000, more than 293 million children in Africa have been immunised thanks to Gavi support. While we know that governments across the continent face a range of competing, worthy priorities, it’s inspiring to see so many choose to put the health of their population first. Gavi commends the African Union and the Government of Rwanda for their leadership in improving health outcomes for the continent and stands ready to support countries in their efforts towards building sustainable immunisation and health programmes to help ensure no child dies from a preventable disease.”

Bill Gates, Co-Chair, Bill and Melinda Gates Foundation said, “The time to mobilise domestic resources for health is now. The nations of the African Union have set bold, ambitious targets. If governments increase their investments in health, not a decade from now, but immediately, we know it is possible to meet set targets. We can end the epidemics of AIDS, TB, and malaria. We can achieve universal health coverage and grow Africa’s economy in the process.”

Dr. Tedros Adhanom Ghebreyesus, Director-General, World Health Organization commented, “Universal health coverage is not a luxury only rich countries can afford. All countries can make progress with the resources they have. The Addis Ababa Call to Action is a powerful commitment from African Union leaders to increase domestic financing for health, and to hold themselves accountable for that commitment.”

The Addis Ababa Call to Action will formally be adopted during this Summit with a Declaration read by H.E. President Kagame. 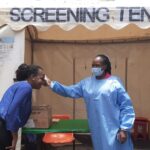 By: PharmAccess OUR APPROACHAs the number of COVID-19 cases in Africa continues to grow -currently 52 countries in the continent are seeing the virus spread to regions beyond the capital…

CHANGE STARTS WITH YOU

BECAUSE OF OUR PARTNERS, WE ARE DOING BETTER FOR OUR PEOPLE